The Catcott Village Association had “a record year” in 2015 according to chairman Matt Tyler in his report to the group’s annual general meeting.

Mr Tyler, who was re-elected for a sixth term, told the meeting the CVA put on seven events during another great year. “We have had more help than ever from volunteers who have got involved with events like the village clean-up, Open Gardens and Curry Night,” he said.

“Our aim again in 2015 was to work closer with other groups in the village including the Playing Field Committee and the Church which I believe has happened.”

He added: “We truly can make things happen when we all pull together.” 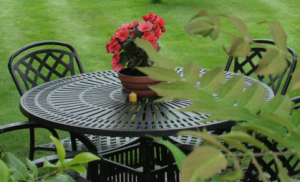 The AGM heard that more than £3,000 was raised from two events with the annual Open Gardens attracting 381 visitors despite poor weather and Curry Night making a significant contribution to CVA funds.

The money is used to put on events during the year, subsidise the Over 60’s Lunch, put flowers in planters around the village and support village groups and organisations.

She said that £2 from each ticket sold for Open Gardens is donated to charities chosen by CVA president Gerry Wheeler whose Vintage Wheels business supplies the cars that make the event unique.

Mr Tyler told the meeting: “Please remember that all funds we raise are put back into the village to put on events, carry out planting and generally continue to improve where we live, so the more we raise, the bigger difference we can make.”

He said the CVA was keen to assist in raising money this year to ensure that the repairs to the church were undertaken. “By attending our events you can contribute towards this,” he said.